While Asian American communities have often been invisible in national media coverage, they have also been building movements within and across AAPI communities, and with other communities of color across the country. Community media have long played a central role in progressive-movement and coalition-building work. Gidra Magazine, an influential activist magazine published in Los Angeles during the 1970s, returned to print in 2019, with an issue dedicated to its first issue, published in 1969, as a celebration of “yellow power”. Renowned Detroit-area activist Grace Lee Boggs wrote a weekly column for the Michigan Citizen, a Black-owned weekly newspaper that published in Detroit between 1978 and 2014. Today, many Asian American publishers are using community-based media to build solidarity among AAPI communities, and with Black, Latinx, Native, and LGBTQ communities. Many are actively working on strategies to combat disinformation and polarization in their communities as well. 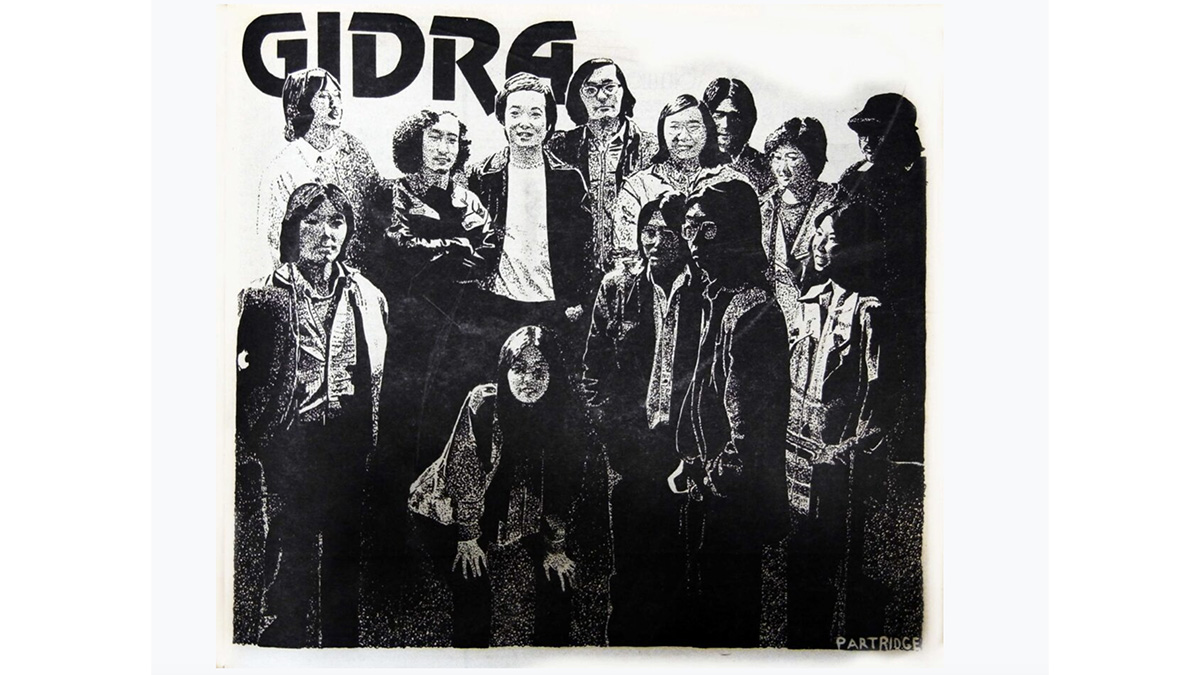 The Gidra, an activist Asian-led magazine from the 1970s, returned to print this year. Image credit: Gidra Magazine.

From Invisibility to Action

Atlanta was a turning point in national awareness of the crisis of anti-Asian hate. After many years of invisibility, Asian communities, and some of the outlets that serve them, found themselves in the center of the public eye. “Since Atlanta, we’ve gotten a bit more interest,” Chen said. “We appreciate the visibility but it’s gutting to come at the cost of peoples’ lives.” But the visibility has given The Yappie, a very new, entirely volunteer-run labor of love from a group of full-time students and early-career journalists and communications professionals, status and leverage it didn’t have before. In their coverage of state-level and national politics, they are now able to reach – and get call-backs – from people who ignored them before. 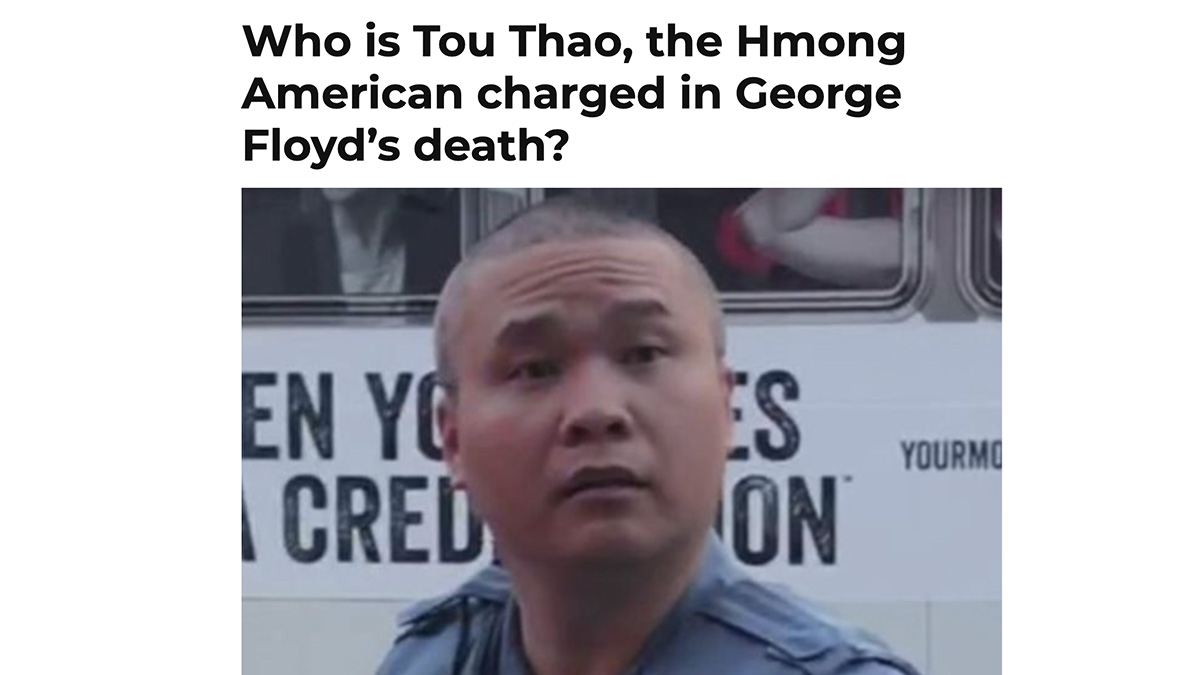 Visibility can be a double-edged sword for Asian communities in many ways. One of the officers involved in the murder of George Floyd is a Hmong Minnesotan named Tou Thao. Said Vue, “This has really been the first time I’ve seen a Hmong person be on the news on a national level. For me, that’s hard to digest in itself. Hmong have been here for 50 years. It’s odd to see our community on the news, especially when it’s related to something so terrible.”

One of her colleagues at Sahan Journal reported that some Hmong Minnesotans had been targeted after the officer’s name was made public, revealing deep-seated ignorance about common names and naming traditions in this community that has been here – and unseen – for so long. Vue plans to continue reporting on reactions to the ongoing trials of officers involved in George Floyd’s murder and examining the community’s attitudes and realities around race and law enforcement. “Whatever the outcome of the trial, it will impact the Hmong community no matter what, and I want to understand what that means for the Hmong community to keep going – and what comes next.” 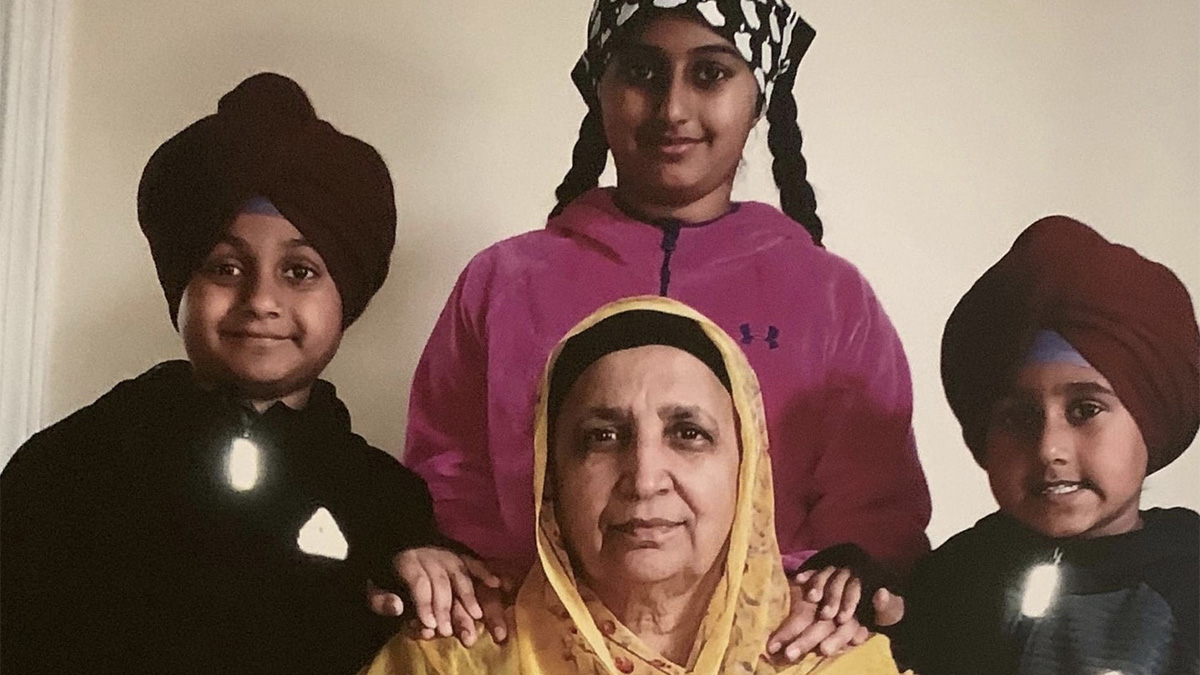 National attention to anti-Asian violence has also allowed community based journalists to showcase underreported and underrepresented AAPI, like Native Hawaiians and Pacific Islanders, and marginalized or minority communities within wider communities. It has also prompted AAPI journalists to explore experiences and ties across Asian America, how to ally with Black-led movements for racial justice and to advocate on a national level on behalf of Asian American communities.

The Yappie closely followed the COVID-19 Hate Crimes Act, which passed in the House of Representatives May 18, after it was passed in the Senate on April 22. While their initial coverage of the bill’s victory in the Senate was celebratory, Shawna Chen noted that many members of the Asian community have an ambivalent relationship to law enforcement, from biracial Black and Asian Americans to AAPI activists and leaders at the forefront of the anti-police violence and immigrant justice movements. She later covered Asian American opposition to the bill in her role as a reporter for Axios. Other outlets have included detailed coverage of police violence in Asian American communities, like this piece on a young Filipino man shot in Los Angeles by police responding to a mental health call. 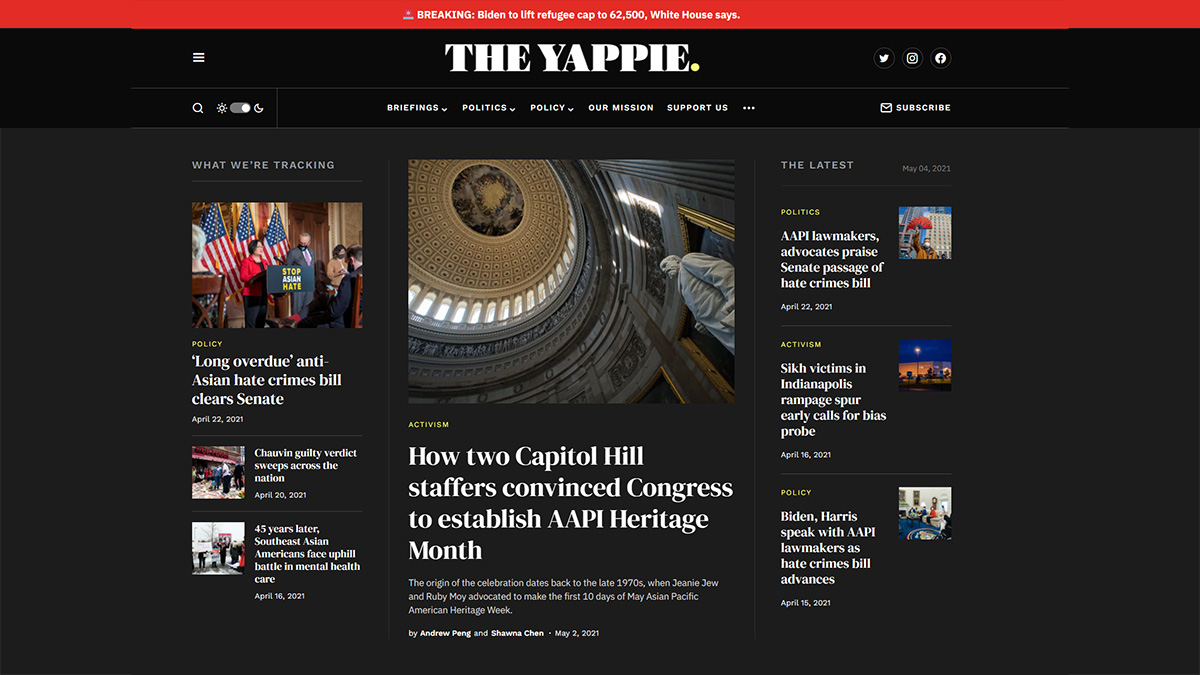 Although pan-Asian solidarity was on prominent display in many Asian community outlets in the aftermath of the Atlanta shootings, as Stop AAPI Hate rallies happened across the country, Jinxia Niu said that it took over a year of organizing to get communities to come together against anti-Asian violence. Mistrust and division within communities is a major roadblock. “It is still difficult to say, even with such an issue, let’s unite together and fight this together.”

Asian community media have always covered politics from countries of origin, and politics in countries of origin have always figured into how Asian Americans have cast their ballots in U.S. elections. But the 2020 presidential election saw a unique nexus between political polarization in Asian countries and in the U.S. Ideological divisions originating in countries of origin, amplified by political polarization and election disinformation in the U.S., drove deep wedges in AAPI communities along generational, gender, immigration status, religious, and political philosophy lines. After decades as reliably Democratic voters, the 2020 election saw splintering of the AAPI vote, effectuated at least in part by disinformation and rumor on Asian-language and in-community social media. In our February conversation series with community media leaders on political polarization, Asian community-based journalists and publishers spoke of the powerful tide of disinformation and social media bullying they were fighting for their factual reporting.

With the proliferation of new and digital media outlets online, on social media, and on messaging platforms like WhatsApp and WeChat that serve global and diasporic Asian audiences, Asian news audiences in the U.S. have increasingly come under the influence of viral disinformation from Asian countries, like India and China. And although many social media platforms, including the Facebook-owned WhatsApp messaging app, have accelerated their effort to take down fake news and groups that might be inciting hate and violence in the U.S., they have not made much headway toward taking down posts or closing accounts in other languages besides English.

In 2019, Chinese for Affirmative Action (CAA) undertook a landscape study of Chinese-language digital engagement. Jinxia Niu said, “WeChat is the main community and engagement space – 60-70% of all communication and engagement happens there.” Even the more “legacy” outlets with long publishing histories have launched WeChat accounts, although the level of engagement with these accounts remains lower than with accounts that originated on WeChat. CAA found that the conservative voice far outweighed the progressive perspective in Chinese-language WeChat individual and outlet accounts – and that streams from the conservative perspective were heavy with disinformation, fake news and misinformation. “We said, we need to do something. The conservative voice and disinformation is going to be a big problem for our community. We identified many challenges, including fake news and disinformation, polarization, and echo chambers. We’re tackling these one by one.”

“We are getting famous for fighting disinformation,” said Niu. Justice Patch’s recent report fact-checking a rumor disparaging an elderly attack survivor accrued 31,000 views and 261 likes. Another report on Chinese American Conversation, fact-checking a racist rumor that most anti-Asian attackers are Black earned 36,000 views and 263 likes. By comparison, the factually accurate and well-reported WeChat posts from “legacy” Chinese-language giants Sing Tao Daily and World Journal average between 1,000 to 1,500 views.

But recently, Niu has come to feel that fact-checking and providing fact-based reports with a progressive lens isn’t doing enough to counter disinformation or really penetrate echo chambers. “By the time we provided a fact-check, disinformation had already been viral and viewed more than 100,000 times,” she said. She and her colleagues moved on to the next strategy. They have now convened a collective of five outlets serving different Asian communities, who are working to amplify progressive, factual news, and make efforts to counter disinformation narratives that go viral.

This work has exposed her to online bullying and threats. “Once you have a progressive voice, it starts,” she said. “The personal attacks are the price we pay. That’s the price of trying to counter disinformation.”

Standing By The Truth, Earning Readers

Nguoi Viet’s Dzung Do has also been targeted online. “We stand by what we print and we don’t back down,” he laughed. “The more they criticize us, the more they read us!” Political polarization in Vietnamese American communities is rooted in the long history of civil war along communist and capitalist lines, and some of the political disinformation circulating in the community is as old as the community itself. 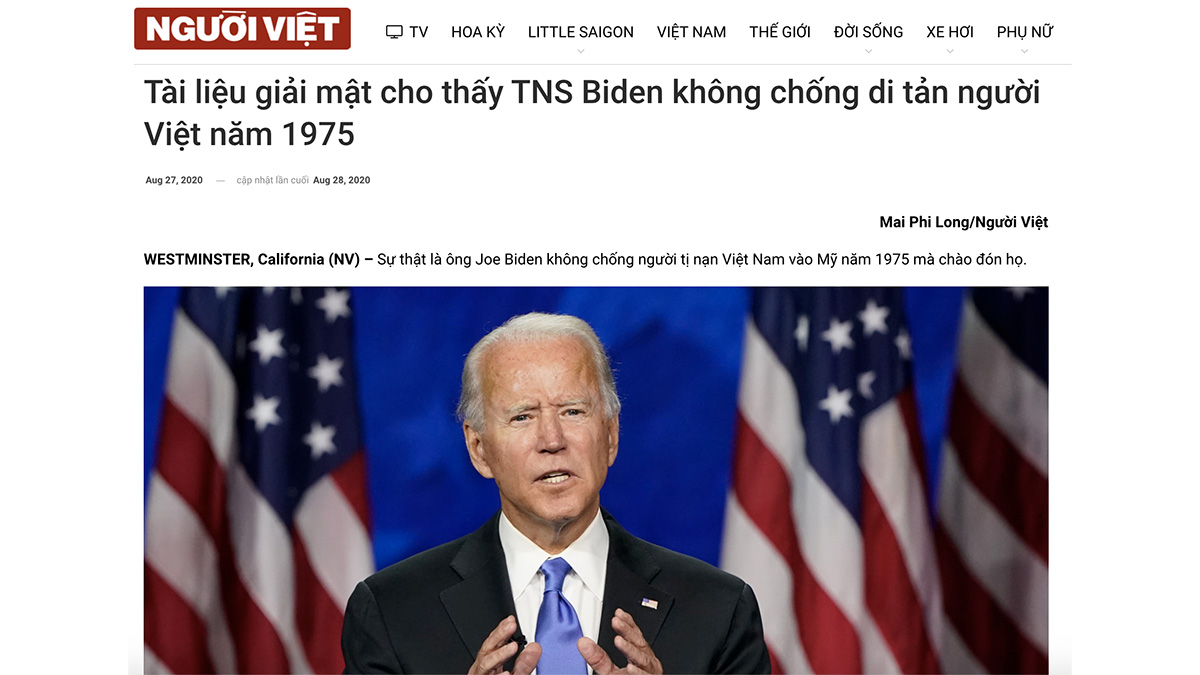 For more than 40 years, it has been conventional wisdom in the Vietnamese American community that President Joe Biden, then a young senator, blocked aid to South Vietnam and opposed the evacuation of Vietnamese refugees. “For 40 years, all Vietnamese media talk about that,” said Do. At the height of the 2020 presidential campaign, the conservative English-language newspaper, The Washington Examiner, ran a story reinforcing this rumor. But Do knew that many of the Vietnam War era documents had been declassified, and was able to locate a memorandum of a conversation that had taken place on April 14, 1975, that contradicted the widely accepted story about Biden’s position on Vietnam and showed that Biden had in fact advocated for relief to be sent to Vietnam and for Vietnamese refugees to be evacuated. In August 2020, Do ran a detailed article, reporting on the declassified document, and critiquing the Washington Examiner piece as well as a piece in a Vietnamese-language outlet on the Washington Examiner piece, that a Vietnamese American had translated (incorrectly). 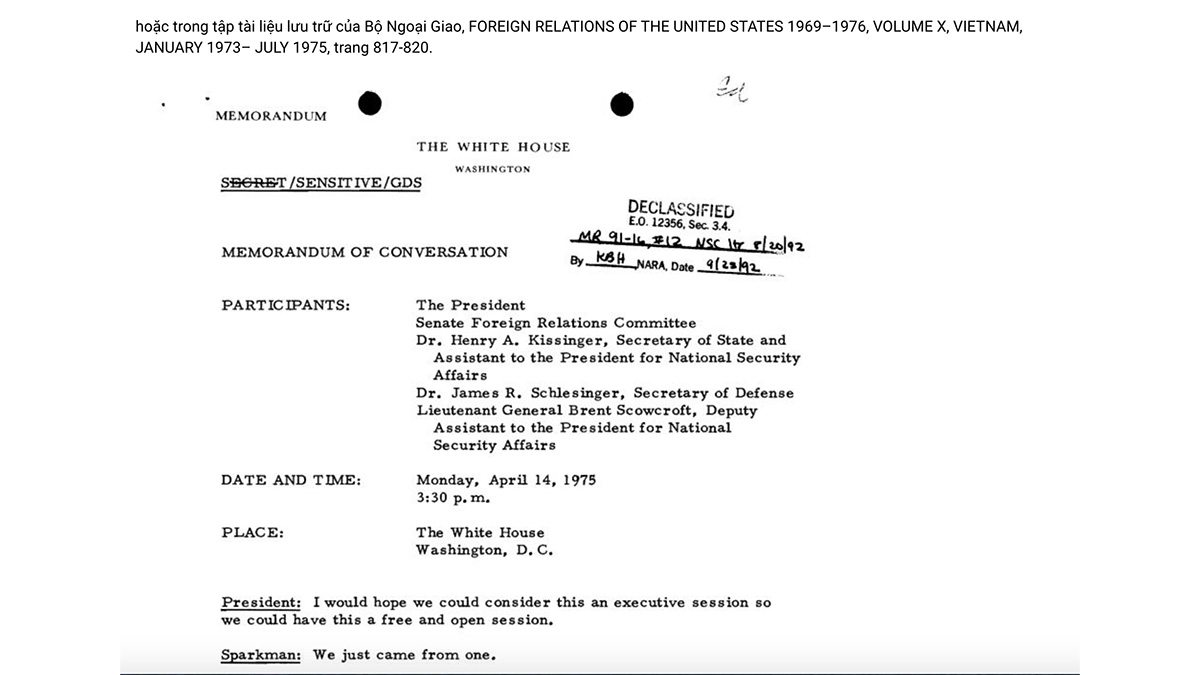 “When we ran the story, there was a big shock in the Vietnamese community,” said Do. “Some said, you guys are so courageous.”

Do can’t say if their reporting changed any voters’ opinions about how to vote in the election just a few short months later. But he knows from the sales and traffic from the issue that Nguoi Viet’s audience and reach grew.

Sunil Adam, former editor-in-chief of the now out-of-print community media giant India Abroad, which has served Indian American communities since 1970 and ceased printing in March 2020, said a lot of the “legacy” Indian community media face pressure to “stay away from politics and avoid displeasing anyone.” When an outlet is dependent on a community for advertising revenue, and the community is highly polarized and steeped in disinformation, the audience backlash can be quick and fierce. In his new role as publisher of the digital platform American Kahani, Adam is committed to showcasing diverse and even conflicting perspectives from within the Indian American community.

“I have been accused of being leftist and a rightist. Attacked by all sides. I would never let that interfere with the coverage or content of the publication,” he said. “I want to showcase the diversity that exists in our community. As long as it’s not harmful or blatantly false, I want [American Kahani] to be a platform where anyone can articulate their point of view.” The approach seems to be working: In its first six months live, American Kahani has had more than 90,000 unique site visits each month. “We have more than 300 Indian American contributors. Their voices are being heard.”

An Epidemic of Hate
The Changing and Expanding Asian Media Landscape