An Epidemic of Hate

By March 2020, the COVID-19 pandemic had claimed nearly 18,000 Asian American and more than 830 Pacific Islander lives, and measures to contain it drove thousands more into unemployment and economic hardship. It also unleashed a parallel epidemic on AAPI communities: an epidemic of discrimination, racism, hate crimes and anti-Asian violence. The violence has touched communities from different corners of Asia, in every part of the U.S.

Two days after the Atlanta shootings, Sing Tao Daily’s Zhou Jingran reported, “These massacres during the pandemic revealed the vulnerability that most workers face in the United States and became the forefront of anti-Asian racism.”

On March 19, 2020, the Asian Pacific Policy and Planning Council (A3PCON), Chinese for Affirmative Action (CAA), and the Asian American Studies Department at San Francisco State University launched a national reporting center to document incidents of anti-Asian discrimination, bullying, and assault, called Stop AAPI Hate. As of March 31, 2021, it had documented 6,603 incidents. More than 2,800 incidents had been reported in March 2021 alone, the same month as the Atlanta shootings. 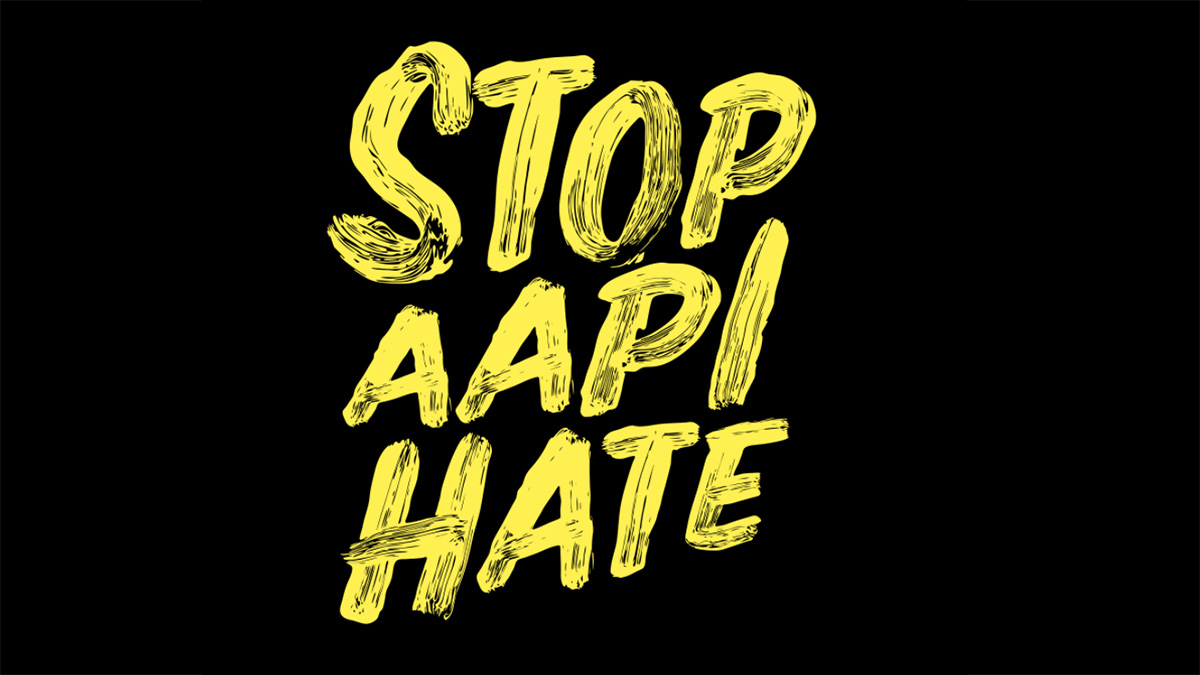 Jinxia Niu, program manager for Chinese digital engagement at CAA and publisher of Justice Patch, a two-year-old digital outlet on the messaging app WeChat, was involved in the Stop AAPI Hate reporting center from the beginning. “In our cultures, people are shy and shameful. They don’t know how to report and document things like this,” she said. “Our strategy was, we need to educate Asian American community members to report this, and to use this data to prove to the community, and also to English media that this is happening.” The Stop AAPI Hate incident reporting form is available in 10 different Asian languages. They published the incident reports on Justice Patch and other Chinese-language digital platforms, and sent press releases to a long list of Chinese-language and English-language media.

“Last year, people’s attention was not on anti-Asian hate. It only started growing when it started getting bigger and bigger and the incidents started getting scarier and scarier,” said Niu. “It took a really long time. We launched the report center in March 2020. It took almost a year – at least seven to eight months to get other mainstream media to realize this is serious. Even between the Chinese and the Asian community itself, it took four to six months for them to realize and pick up the story.”

Asian Journal managing editor Christina Oriel said their coverage of attacks against members of the Filipino American community has picked up over time. “The challenge is getting the community to speak up. There are so many attacks we’re not hearing about.” But the coverage they have published has encouraged others to come forward, she said. By February, Asian Journal was actively following 12 different hate crime stories, reporting on developments in the cases, victims’ recovery and families, and how their communities were responding. In March 2020, Asian Journal launched its own Stop Asian Hate: Storytelling to Combat Hate webpage. In it, the outlet shares big-picture data reporting on the anti-Asian violence crisis, advocacy by high-profile and celebrity Filipino Americans, stories of victims – like a teenager punched during a basketball tournament or an elder assaulted while shopping – and tips for staying safe. 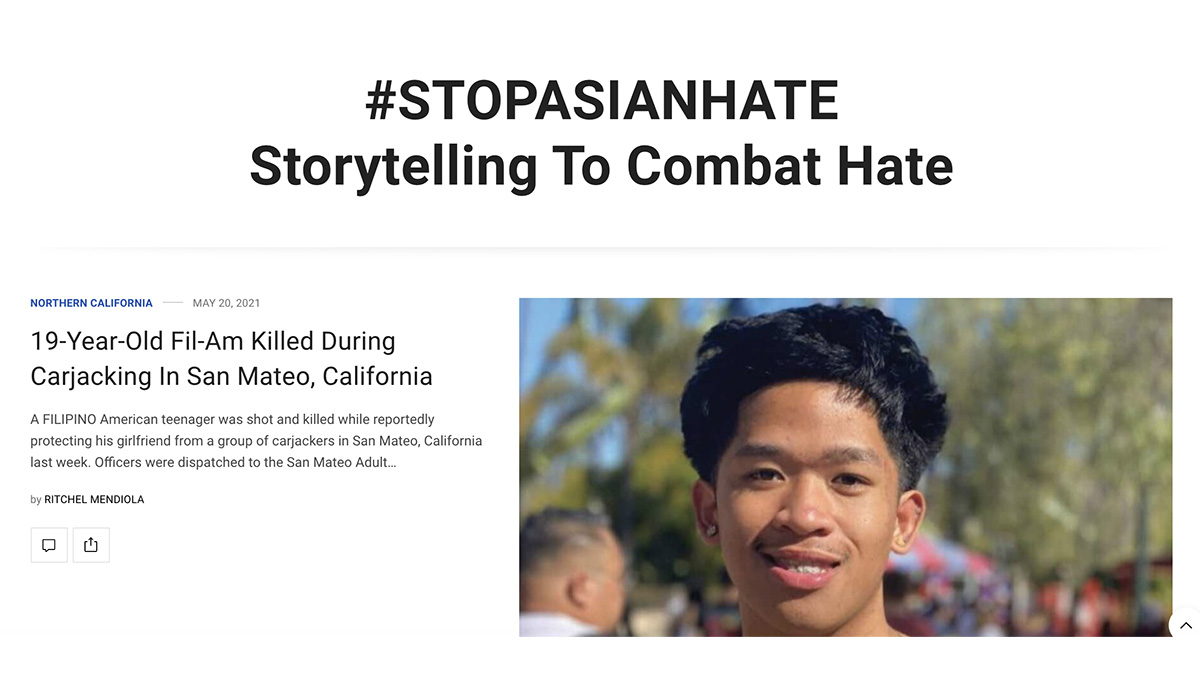 Also in March 2020, World Journal launched a “Discrimination” section, documenting incidents of Sinophobic discrimination and violence, along with useful resources and tips for Chinese American elders, essential workers, and families. In May, with the beginning of AAPI Heritage Month, this section was renamed “Asian,” with stories focusing on AAPI history, culture, and personalities.

Niu said that, after the Atlanta shooting, Stop AAPI Hate has also focused on healing. “At the beginning, we were just focused on putting out more stories and data. It was only later when it got so bad and people were really so traumatized that we felt the immediate need to listen and heal the community, hear how angry and sad they are, and to show we stand with them.”

The focus now, she said, is mainly to provide communities with resources and to advocate for effective long-term solutions at the local, state, and national levels. And, a central goal remains “healing our community and loving our people.” They do this by organizing rallies, candlelight vigils, and community meetings, where Chinese Americans and broader Asian American coalitions come together to mourn, organize, and demand action. They then cover these events in CAA’s three different WeChat outlets – the official CAA WeChat account, Justice Patch, and Chinese American Chats. Through these, Niu said community members not only feel seen, but also empowered.

The day after the Atlanta shootings, Atlanta-based Korea Daily grappled with the realization that “police do not condemn hate crimes,” and conveyed the shared outrage and anger of Korean American communities and organizations across the country, not just at the crime itself, but at law enforcement’s failure to acknowledge and respond to a clear-cut hate crime. The following day, the outlet featured a story about a fundraiser to support one of the victims’ two orphaned sons, and about the family itself, on its homepage. 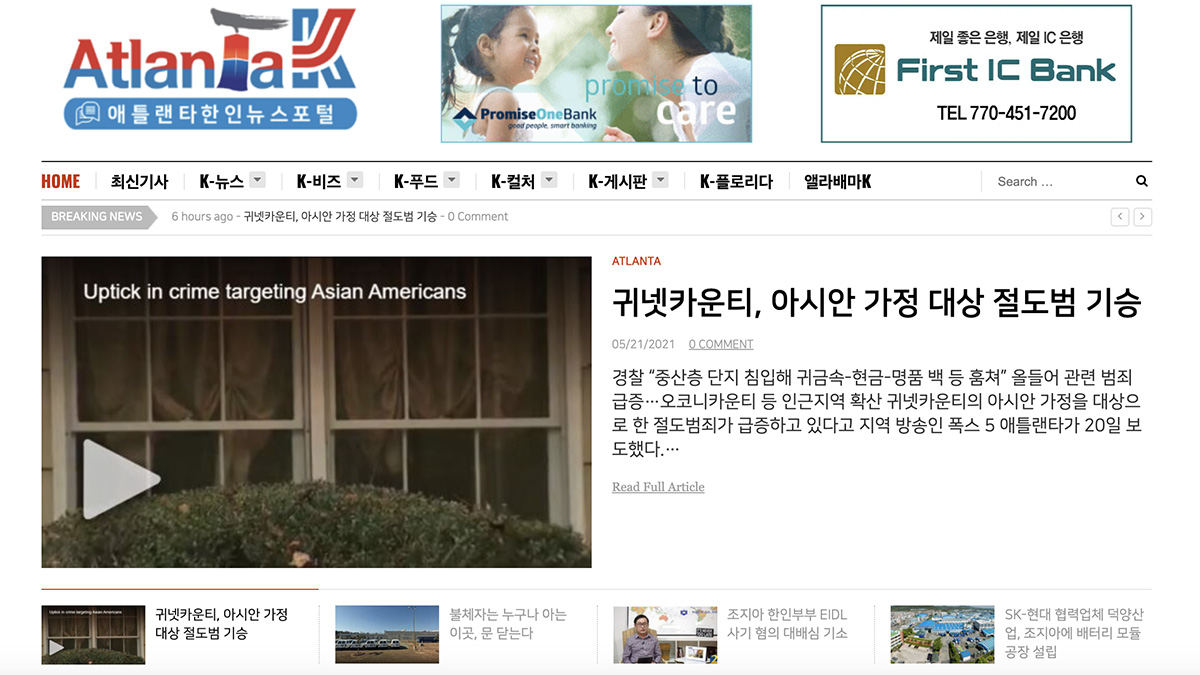 Atlanta K was one of the first outlets to break news about the March 16 shooting. Image credit: Atlanta K.

Other outlets focused on giving communities concrete resources and tools for staying safe. Indonesian Lantern, serving a small but highly engaged community of some 10,000 Indonesian Americans in Philadelphia, responded to the spike in anti-Asian violence by providing concrete resources, like the hotline set up by the Indonesian consulate general; information about actions by faith leaders, like a pastor holding a series of meetings with Philadelphia police; and a virtual meeting, “Facing Asian-American Hate Actions,” to gather complaints from the U.S. Indonesian community. Japanese-language Shukan NY Seikatsu, a free weekly serving Japanese Americans in the greater New York City region since 2004, offered self-defense training courses.

To serve their communities through this crisis, Asian community media have reaffirmed the humanity of people who have been reduced to stereotypes by telling their stories; created spaces for collective grieving and rallying support around community members; and empowered frightened communities with resources, skills, and opportunities to take action. They also offer spaces for nuanced exploration of complex feelings in Asian journalists.

Shawna Chen is the editorial director of The Yappie, a year-old outlet that began as a newsletter on Asian American politics for and by young and millennial AAPI. Shortly after the Atlanta attacks, she wrote a much more personal piece than she had envisioned writing for an outlet focused on legislative and political action, on the Asian woman’s body and its connection to the shootings.

While Asian American journalists working in national media outlets said their personal connection to the stories were seen as a liability, journalists in community media view their personal connections with a story and their intimacy with the communities they serve as a call to action – and a personal responsibility. “This issue is visceral for people who are reading our stories, and it’s also visceral for us,” said Chen. “On the one hand, I want to see these videos with my own eyes, it’s like bearing witness. But it does affect your psyche.”

Still, she said, writing for an Asian community outlet allowed her to process her own pain even as she supported the wider Asian American community. “In our business, to be tracking all these hate incidents and no matter how loudly AAPI scream to never hear a response – in the aftermath of Atlanta, it gave me a sense of purpose and a way to channel my feelings,” she said. “Writing for AAPI audiences gives me more space to go into complexities I wouldn’t be able to otherwise. [The Yappie] is a bit of a safe space for me. I’m very proud of it.”

Although Korean-language outlets in Atlanta were able to respond quickly to the March 16 shootings with breaking news stories (we shared examples of these earlier in this report) that were richer and more detailed than the breaking coverage in national media, community media often work on a different timeline. Outlets with very small staff and a slower publication cycle may not produce a story right when the national attention has turned toward it. “The benefit of ethnic press is that even though we might not get to it this week, we are playing a long game,” said Christina Oriel. “It’s not breaking news for us. And by taking a little more time and following stories for longer, we are also allowing our communities to process their grief.” 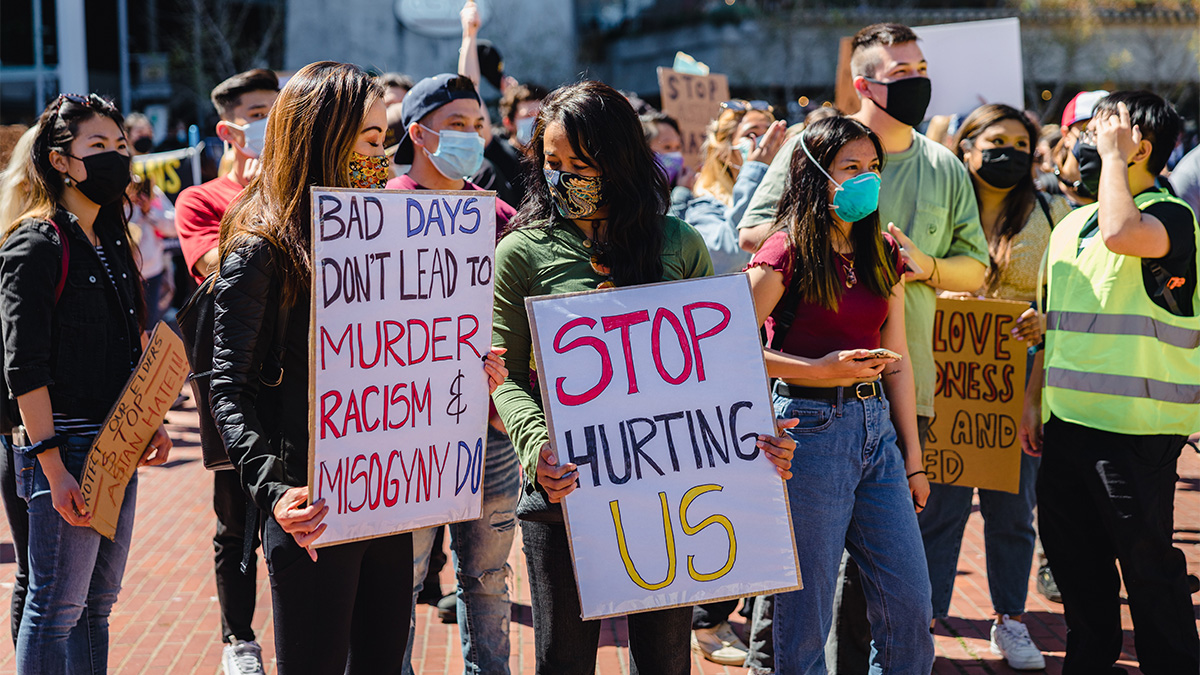 “I have two separate viewpoints, as a person who is Hmong and as a journalist. I have both an insider and an outsider perspective about what I see happening inside my community and inside me and around me,” said Katelyn Vue. When she has reported inside the Hmong community in Minneapolis-St. Paul, Vue said, “Once they knew I was Hmong, they opened up to me a lot more but that also shared more vulnerability and that impacted me.”

“It becomes personal when I talk to someone and they say something that reminds me of something my mom says,” she said. “It takes a lot to be honest with someone, that should be valued.”

Quincy Surasmith, Thai American producer of the five-year-old podcast Asian Americana, said that his stories have largely drawn from his background as an organizer in Asian American cultural spaces in Los Angeles. “I build relationships with the people I cover. Does that mean that there will be biases attached? Sure,” he said.

In fact, community-based reporting helps Surasmith build and deepen relationships in the communities he covers. Once he has spent months and years covering a daily life and work inside a community, from hot-sauce businesses to museum exhibits, community members know and trust him. “If you want to tell Asian American stories, you can’t just start reporting now, or just about these [hate crimes]. You have to be building these things the whole time, not only when they’re the story.”

Said Vue, “It’s hard to get the full grasp of understanding the communities you report on, it’s hard to build relationships, I get that. But that’s really what should be valued in journalism schools – that we talk about community reporting and what it means to write an in-depth story on a community that has been here for a long time but has not been covered.”

In addition to writing for Sahan Journal, Vue is a community reporter for The Minnesota Daily, the University of Minnesota’s student-run newspaper. “There should be more than one person covering a community. There’s a lot of nuance that I can show. The Hmong community is diverse in itself, and there are parts of the Hmong community in other parts of Minnesota, too, that need to be brought more attention. It takes a lot of time and energy to build those relationships. There should be more tools to do a better job elevating community media and telling the stories of marginalized communities.”

Dzung Do, editor of Nguoi Viet, the largest Vietnamese-language newspaper outside of Vietnam and in print since 1978, said that sometimes reporting for a community-based outlet requires journalists to put relationships before the story. The outlet recently ran a story about a young man who’d committed suicide by self immolation. After they’d obtained the family’s permission to publish the story and confirmed facts with local healthcare and law enforcement institutions, they published it. After it ran, members of the family had second thoughts and called to ask that it be withdrawn. “We had to think about profit or community, like that,” he said. “It was an exclusive, a hot story, but it was painful for the family. So we took it down. Serving the community means protecting people.”

Loss and Survival During COVID-19
Solidarity, Division and Polarization