Loss and Survival During COVID-19

Asian Americans and Pacific Islanders (AAPI) faced extremely high rates of infection and death from COVID-19. Kaiser Family Foundation research from September 2020 showed that AAPI were less likely to get tested, but more likely to test positive when they were, and then more likely to need hospitalization than white Americans. That 29 percent of AAPI live in multigenerational homes contributed to rapid spread of infection through AAPI communities and widespread chronic illness, like diabetes and heart disease, exacerbated its impact.

Even as many outlets faced existential threats with the loss of advertising revenue from community businesses during lockdowns to contain the virus, Asian media found ways to sustain their journalism when their communities turned to them for relevant, reliable, and in-language news.

The pandemic’s essential workers – in healthcare, food supply, education, and childcare – were predominantly AAPI, with more than four million Asian Americans manning the frontlines throughout the pandemic.

In September 2020, the National Nurses United (NNU) reported that, while they made up just four percent of registered nurses in the U.S., Filipino Americans accounted for 32 percent of nurse lives lost to COVID-19. Still, their lives – and their deaths – barely registered to a wider public. But community-based journalists serving Filipino American communities have always covered Filipino healthcare workers. Asian Journal, which has served Filipino communities in California, Nevada, New York and New Jersey since 1991, has honored Filipino American nurses every National Nurses Week. The outlet has also published in-depth reports on nursing, like this history of Filipino nurses in the U.S. from 2019. In its March 2021 report on the 83 Filipino American nurses lost to COVID-19, Asian Journal connected these losses with the disproportionately high death toll of Filipino healthcare workers worldwide. 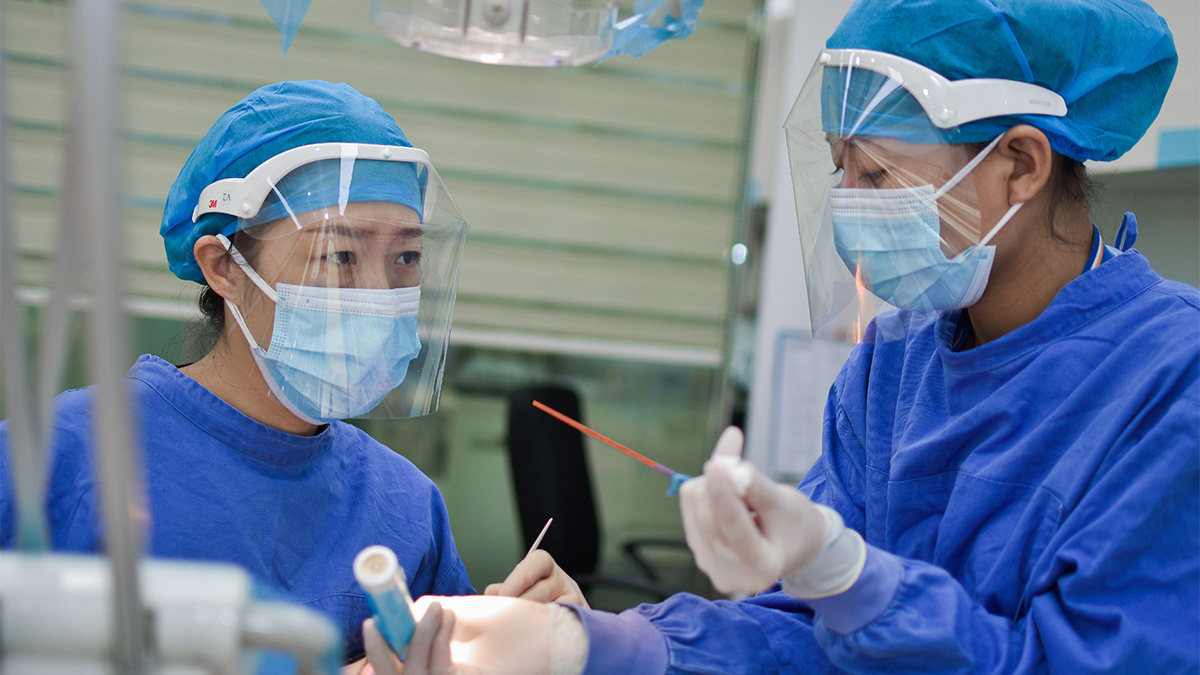 Indian communities also contributed heavily to the frontline healthcare workers fighting COVID-19; at least six percent of U.S. nurses were trained in India, most of them in the southern Indian state of Kerala. Serving a global labor diaspora, Malayalam-language community media, like EMalayalee, provide community news and analysis from the U.S., Persian Gulf, Southeast Asia, and India. As India faced a devastating COVID-19 surge in Spring 2021, EMalayalee was one of the only outlets in U.S. media to cover the impact of fundraising restrictions imposed by the Hindu nationalist government on the ability of diasporic communities to send aid and relief to India.

Other AAPI essential workers were even more vulnerable, and just as exposed as better-paid healthcare workers. Rong Xiaoqing, who has reported on New York City’s Chinatowns and Chinese-language communities for more than 15 years for Sing Tao Daily, wrote in April about immigrant workers from China’s Fujian province, who had lost their jobs in take-out restaurants or other small community-owned shops and businesses. Since many of these workers relied on their jobs to provide lodging and food as well as employment, she wrote, a community-based organization offered workers hotel rooms and meals to help them also avoid homelessness and hunger during the pandemic. Sing Tao Daily, Hong Kong’s second largest daily newspaper, established its U.S. edition in New York City in 1965, and remains one of the largest daily print publications serving Chinese-speaking communities across the country. 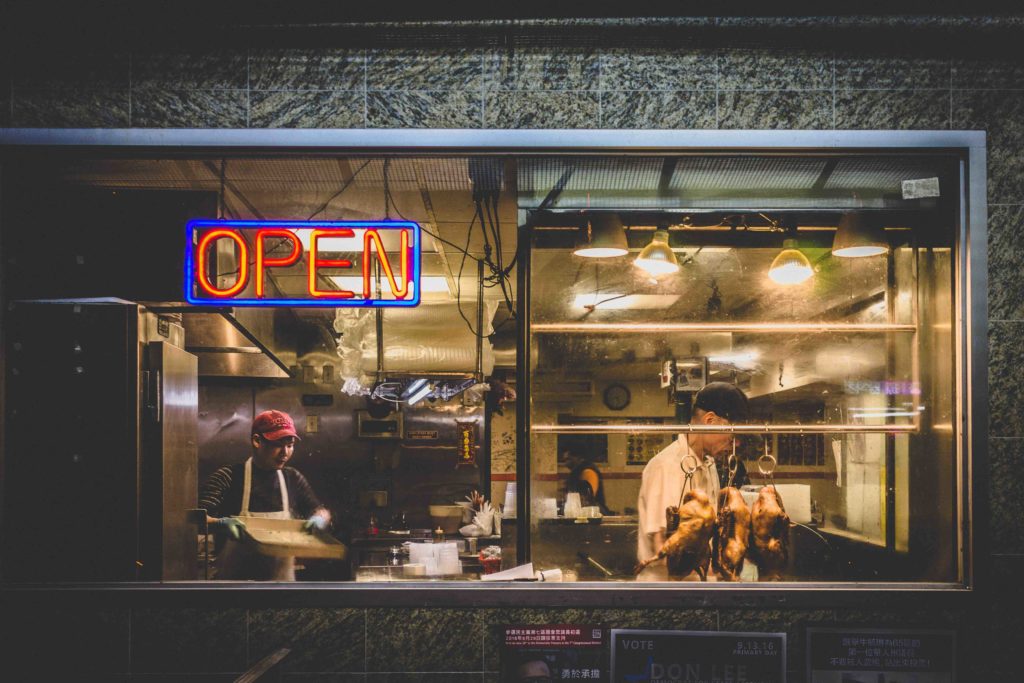 Chi Zhang, a scholar specializing in immigrant media and local journalism, observed that the pandemic has revealed both the particular vulnerabilities and news needs of different AAPI communities, related to the very specific roles that many Asian communities play in the U.S. economy and society – from Filipino nurses and Fujianese takeout restaurant workers to Vietnamese nail salon workers and Punjabi meat processing plant workers. “Those occupations were particularly impacted by COVID-19, and what the pandemic made extra clear is the critical need for reporting and stories that reflect those realities.”

Asian community media do just this, and more. They serve as a local news source for communities with global locations, and who are never served in commercial local news. Samoa News serves Samoan Americans and other Polynesian and Micronesian communities in Utah, the largest Pacific Islander community on the U.S. mainland. In July 2020, they reported that Samoan Utahans, many of whom suffered from other chronic health conditions, were getting infected at 2.5 times the state average. The outlet not only told their stories and quoted Pasifika public health experts, they also shared public health resources specifically for Pasifika people. In January, as Samoa’s total travel ban was extended, the outlet reported on the more than 100 American Samoans who were stranded in Utah.

Like Samoan Utahans, Hmong Minnesotans also disproportionately died of COVID-19. In April, Sahan Journal, a two-year-old digital outlet serving immigrant and refugee communities in Minnesota, reported that Hmong death rates had risen by 50% between 2019 and 2020, and that the overwhelming majority of these deaths were from COVID-19. Their report included helpful explainers on risk factors and widespread health conditions among Hmong and Karen Minnesotans, both resettled refugee communities from Southeast Asia, as well as resources for community members to access care.

As news broke of the National Nurses United’s findings on Filipino American nurse deaths, another community media outlet for and by Filipino Americans was just coming together. Concerned members of the Filipino Young Leaders Program (FYLPRO) convened a COVID-19 task force, and in October 2020, launched Tayo Help Desk, a new digital platform explicitly aimed at combating disinformation about COVID-19, building transparency and open communication, and dismantling cultural taboos. “In our communities,” said co-founder and program manager Leezel Tanglao, “there’s a lot of shame about asking for help.” 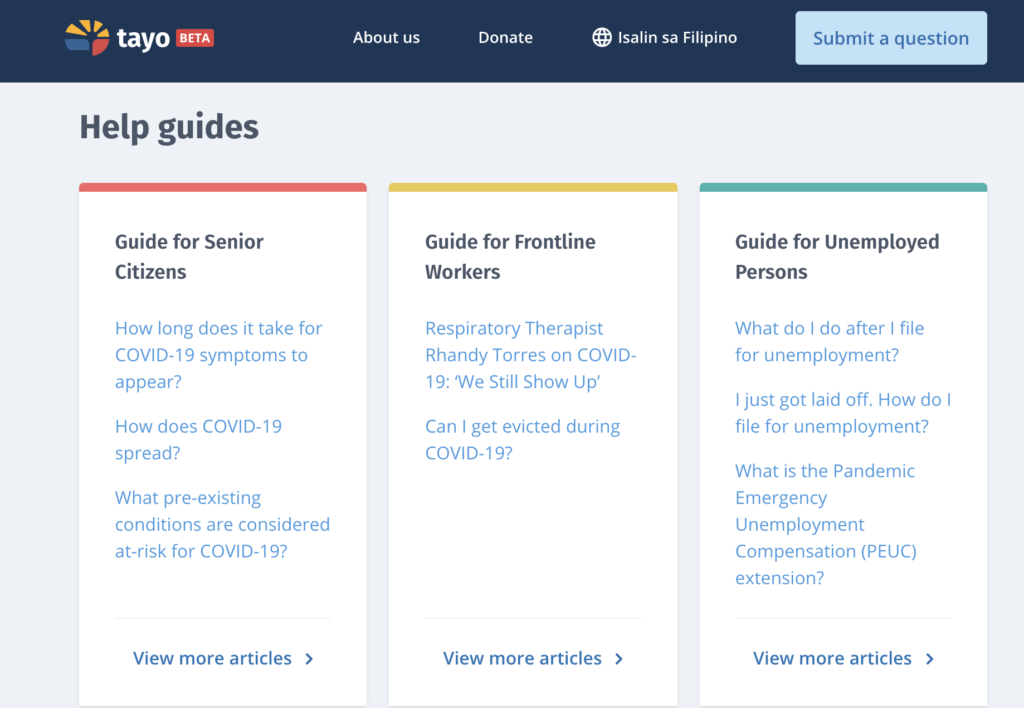 Within two months, Tayo had published more than two dozen articles in response to questions from community members, in both English and Tagalog. By February, they had commissioned the first-ever national survey on vaccine attitudes among the U.S. Filipino population; created specialized guides for seniors, essential workers, and the unemployed; and launched a series of vaccination webinars and town halls. Tayo created a truly unique, nonjudgmental space for members of a community to ask questions and receive fact-based, reported, bilingual answers, at a time when misinformation, disinformation and rumor about COVID-19 was proliferating on Tagalog-language social media and messaging app threads.

Tony Lai, owner and manager of KhmerTV, the only Khmer-language television station serving more than 50,000 Cambodian Americans in Long Beach, California – the largest population of Cambodians outside of Cambodia – emphasized the importance of in-language resources to help communities dealing with isolation and illness. “For our older community members, it is an access issue and language barrier. They rely on us.” Serving the elderly is at the front of his mind. Many of the first refugees to arrive in the U.S. after the fall of the Khmer Rouge in 1979 went straight to work and never learned English. He gets calls now from people who are homebound, or staying in hospitals, and have nothing else to watch. He broadcasts travel shows from Cambodia, showing the landscape of their youths.

For many, he said, the uncertainty and losses in the pandemic have triggered traumatic memories of war and displacement. “Some people are shy and don’t want to open up. They’re afraid others will look down on them.” His solution is to make resources available in the Khmer language, and prominently display the station’s telephone number during each program. One program is a regular spiritual lesson from an area Buddhist monk, and another is a regular series with a Cambodian doctor, speaking about PTSD, addiction, and other mental health issues in the community. Viewers may not reach out to local public health organizations or government agencies on these matters, said Lai, “But they do call the doctor from our show.” Lai funds KhmerTV with income from his other business providing voice-over-internet, and during the pandemic, he has barely managed to keep both afloat. But he plans to keep broadcasting. “We’re the only one! We have to do something to help the community.”

One of the primary tasks of Asian community media in the pandemic has been conveying information about vaccination in Asian languages. Taiwanese giant World Journal – the largest Chinese-language newspaper in the U.S. – created an entire Vaccine Hub section, with reporting on vaccination rates and changing vaccine guidance, and detailed information about how and where to get vaccinated. Suab Hmong News, serving Hmong audiences in Wisconsin, maintains a community section on its YouTube page, including video tutorials and guidance. TBN24 Bangla is a rapidly growing and widely trusted news channel for Bangladeshi Americans, a community that has been hard-hit by the pandemic and whose infection and death rates from the virus community leaders maintain have been undercounted. TBN24 broadcasts a daily wellness program, featuring detailed news and guidance on vaccination among other things. 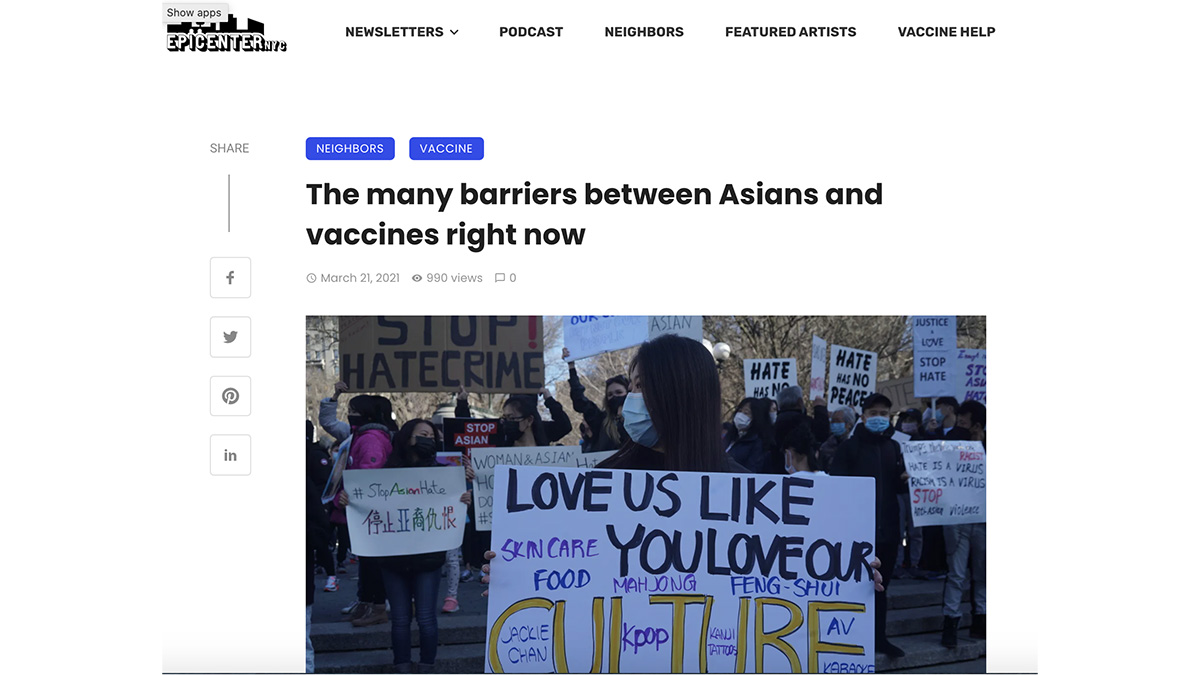 But Asian communities face many more barriers to accessing vaccines than language. Many of the more than four million AAPI essential workers and their relatives are undocumented – at an estimated 1.7 million in 2017, Asian immigrants are the fastest growing undocumented population in the country. Southeast Asian communities still face higher rates of poverty than other AAPI communities, and Pacific Islanders have lower rates of access to computers with broadband Internet access than other AAPI. To break down these barriers and reach the most vulnerable, Asian community media have pivoted from simply informing to directly serving their communities – creating community spaces and resources, booking vaccine appointments, and even arranging rides.

KhmerTV brought Internet-savvy younger community members on the air to show viewers how to book appointments, and they also made appointments for 400 people. Going a step further still, the outlet arranged transportation to bring people to vaccine sites, and there, filmed community members receiving the shot. While they filmed, they asked staff questions about the vaccination process, and asked vaccine recipients to talk about their experiences getting vaccinated.

The largest Korean-language newspaper in the country, The Korea Times, with editions in Los Angeles, New York, Washington DC, San Francisco, Seattle, Philadelphia, Chicago, Atlanta, Texas, Honolulu and Toronto, organized a four-week-long vaccination clinic in Los Angeles, in partnership with Radio Seoul and MCCN Community Clinic. They were able to get 2,000 members of the city’s Korean community vaccinated. In their community Q&A space that loosely translates to “Knowledge Talk,” they have created a special section for questions related to COVID-19, in which community members ask and share their experiences with getting vaccinated, accessing their stimulus payments, finding good insurance, and learning about international travel and quarantine rules.

Like many in Black- and Latinx-owned media, Asian community media leaders were quick to point out that lags in vaccination rates had less to do with vaccine skepticism and personal attitudes and more to do with structural issues and accessibility. They pointed to limited outreach to AAPI communities or Asian languages, and few opportunities for essential workers to work around restrictive, shifting work schedules.

Epicenter NYC, a new community-based outlet serving diverse communities in Queens and Manhattan, many of which are AAPI, set up a team to book vaccine appointments as soon as they became available. They soon compiled a complete resource page for getting vaccinated, with webinars and virtual community meetings on how to book appointments for yourself and others, changing CDC guidance, and vaccinating children. By late March, they’d booked more than 2,600 appointments. Using this experience as a data set, they quickly drafted a powerful lessons-learned document that effectively challenged pervasive media narratives about vaccination gaps in communities of color, shifting the frame away from “vaccine hesitancy” and toward “accessibility and equity.” They followed this up in May with a set of recommendations, likewise rooted in community experiences and relationships, on how to push through the next threshold of vaccination to reach those who were not hesitant but were not yet vaccinated because of other accessibility issues.

Katelyn Vue, a Hmong American student journalist at the University of Minnesota’s Hubbard School of Journalism, writes for Sahan Journal. She said that, in the absence of concerted public health outreach from official sources, Hmong community members relied on each other – and in-language and community media, like the Hmong Times, Hmong Today and 3HMONGTV. “The relationships are what have helped us survive.”

Introduction
An Epidemic of Hate