Asian Media on the Front Lines

How Community Media Have Served Asian Americans During the Pandemic

Following the devastating shooting spree that killed six Asian American women in Atlanta on March 16, much of the coverage in national media came under criticism. At the same time, local Korean-language news media leveraged relationships and in-language reporting to break story after story and serve their communities. Reporting from within the community, outlets like Atlanta K, Korea Times and Korea Daily were able to identify victims, offer first-hand accounts of what the shooter said and did, and give voice to the survivors and the victims’ family members. Their journalism not only told the story of what happened – but created spaces for a shocked community to grieve and rally support around the victims’ families and businesses. 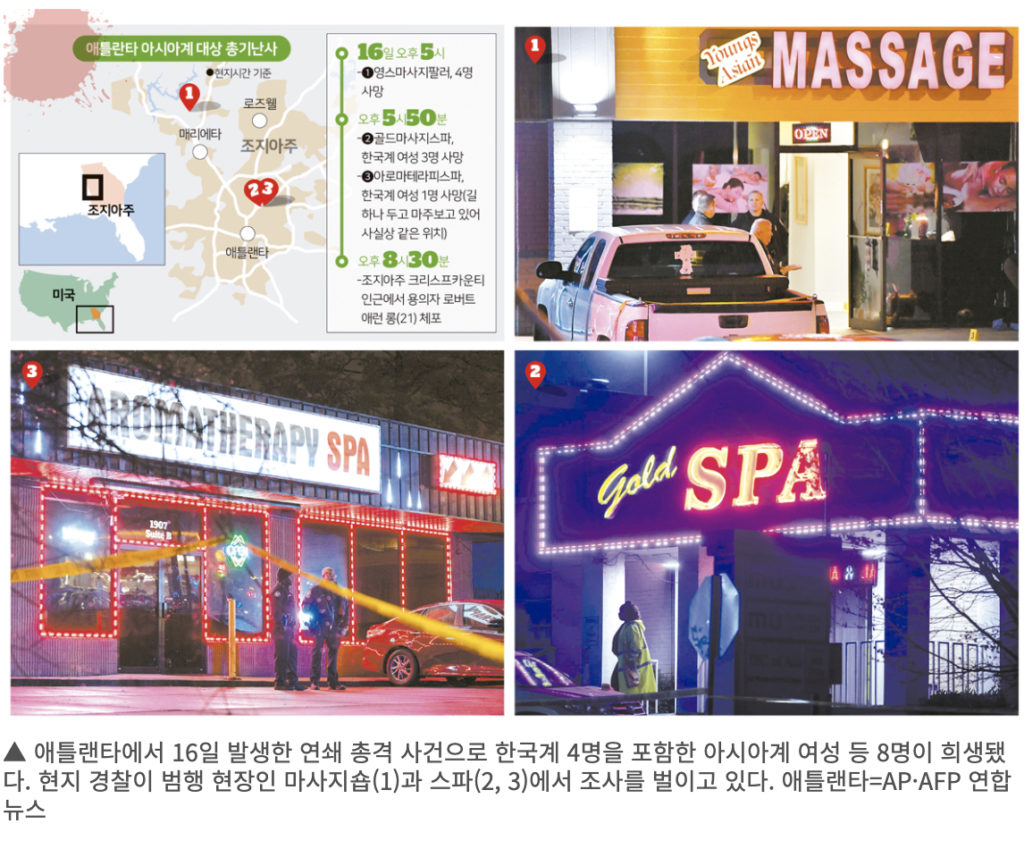 The intimacy and impact of their coverage stood out against the wider media response to the shootings, but also shone a light on a long overlooked and essential media ecosystem: media for and by Asian Americans and Pacific Islanders (AAPI). The country’s most linguistically diverse and fastest growing population, AAPI are some 23 million people strong. AAPI largely belong to 19 different ethnic groups – and many of these groups are themselves linguistically, religiously, and ethnically diverse. And yet, AAPI remain largely under- and mis-represented in mainstream media coverage and on television.

In an April 8 conversation hosted by Axios on Anti-Asian Violence in America, activist Amanda Nguyen said, “For me it’s quite simple. The problem is invisibility, so the solution is visibility…. We need to be seen in our full humanity.” She was speaking, in part, to the general invisibility of Asian Americans in media.

Community media for and by AAPI offer the remedy – reflecting back their communities in their full humanity every day and over decades. They meet AAPI communities where they are, in print newspapers stacked by host podiums in community-owned restaurants, on websites and YouTube channels viewed in global diasporas, on chat messaging apps, and in low-frequency radio stations. They publish and broadcast in dozens of Asian languages, from Tagalog to Nepali Gorkha, from Vietnamese to Mandarin, from Punjabi to Bahasa, from Korean to Hmong. They use standardized scripts, reflecting language politics from countries of origin, and voice texts for dialects spoken by linguistic minority communities within wider Asian American communities. 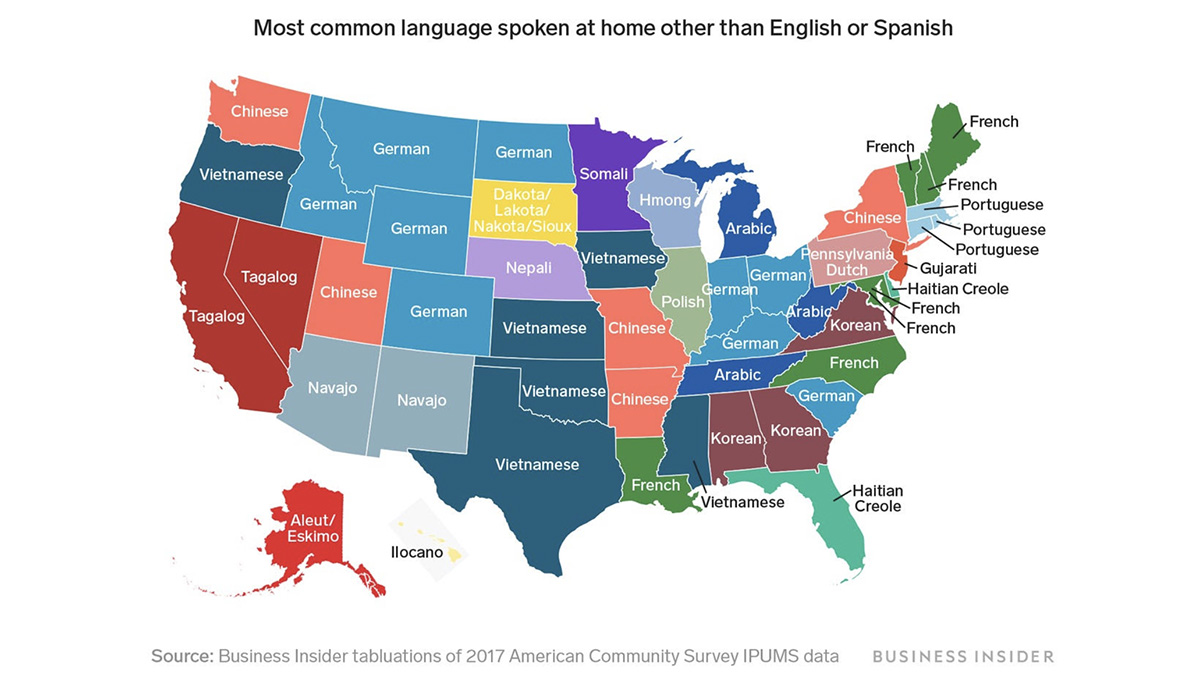 In many states, the most widely spoken languages besides English and Spanish are Asian. Image credit: Business Insider

They keep their communities informed through military coups and natural disasters and COVID-19 surges in countries of origin, and they connect them to local resources on immigration, education, healthcare, and more. They entertain the elderly, instill cultural and linguistic traditions in the young, and keep people used to daily interactions connected through the isolation of American life. Asian community media are investigative reporters, fact checkers, service and solutions journalists, and community builders.

This AAPI Heritage Month, we are pleased to offer this rare glimpse at the dynamic and rapidly evolving Asian community media landscape. We will highlight how different Asian media outlets serving AAPI communities across the U.S. have responded to the crises of COVID-19, anti-Asian violence, and disinformation and political polarization converging on their communities during this past year. We will conclude with a look at emerging trends in Asian community media, as legacy print outlets expand into digital and social media platforms to serve new arrivals and global audiences, and as new outlets proliferate to serve communities well into the second and third generations, navigating generational, linguistic and political divides. 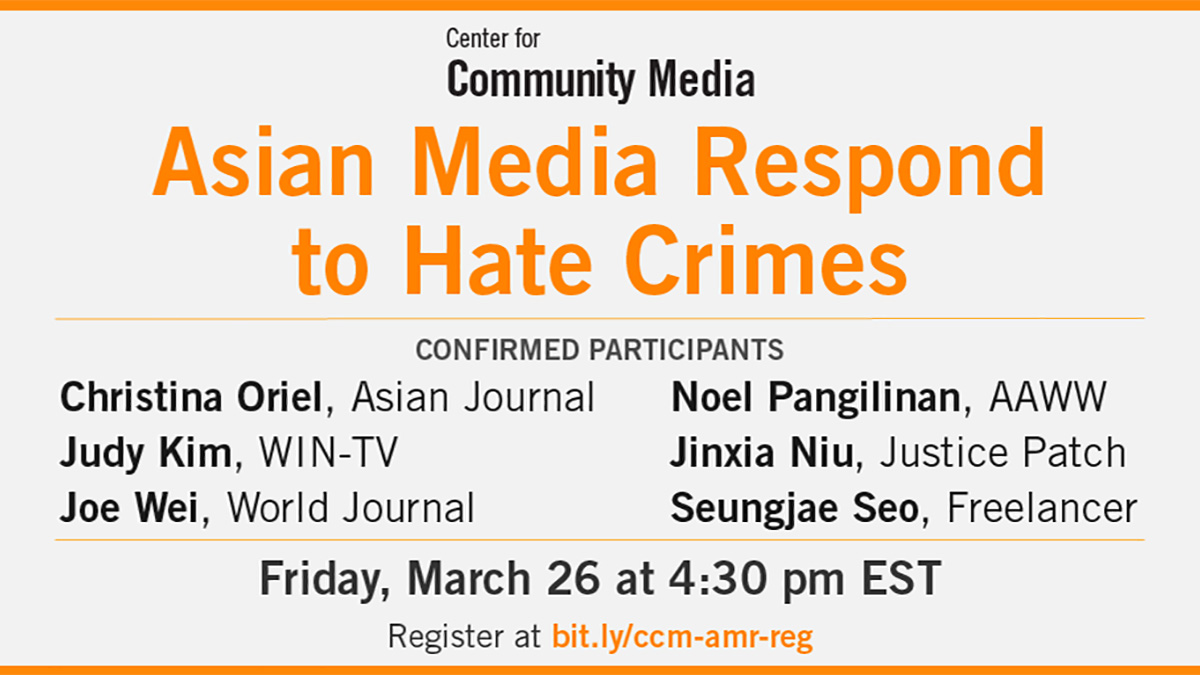 CCM convened a town hall for Asian media leaders to discuss their response to hate crimes.

This report is the result of an ongoing series of conversations and listening sessions, ranging from one-on-one calls with publishers serving AAPI communities to public conversations, like those that took place during our three-part polarization conversation series and our town hall discussion with newsroom leaders serving Chinese, Filipino and Korean communities across the country. As we have engaged with Asian media, we have shared some of their work on Twitter, in response to the Atlanta shootings and anti-Asian hate, to the mass shooting at a FedEx facility that claimed four Sikh American lives, COVID-19 surges in South Asia, and AAPI Heritage month. We are thankful to the many people who have given generously of their time to help us gain insight into this critical media sector, on the front lines of multiple crises and at the crossroads of survival and innovation.

Loss and Survival During COVID-19

This report was written by Kavitha Rajagopalan, Community Engagement Manager at the Center for Community Media, a research and advocacy center for the national community media sector at the Craig Newmark Graduate School of Journalism at CUNY.